The ten courtyards of the Munich Residence 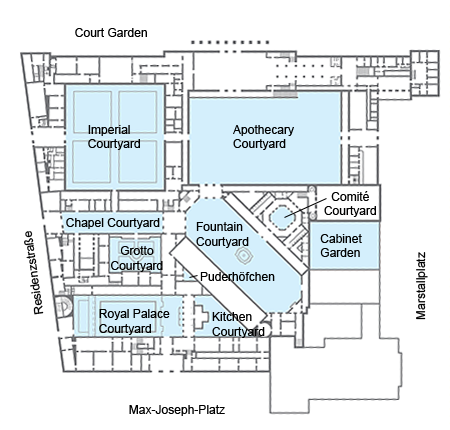 The numerous inner courtyards are a characteristic feature of the Residence. Most of them were created when new buildings were connected to existing ones as the complex was continuously extended.
Others, such as the Comité Courtyard opened in 1958 or the intimate Cabinet Garden next to the Court Church of All Saints, assumed their present form only during the reconstruction of the Residence. The Fountain Courtyard and the Imperial Courtyard had a particularly important function in the Residence as open-air foyers, reception and access zones and as the setting for court festivals and ceremonies. 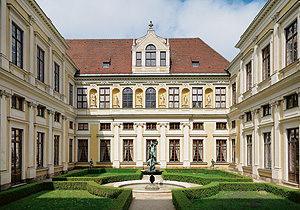 From 1581 to 1589 Duke Wilhelm V had a summer palace built around a gardened courtyard next to the Antiquarium, which had been erected under Duke Albrecht V.

The courtyard takes its name from the grotto on the west façade of the Antiquarium, complete with fountain and shell decoration. 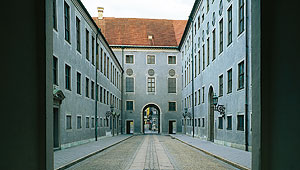 Duke Maximilian I had the Chapel Courtyard erected from 1603 to 1630 to the west of Wilhelm V's Grotto courtyard buildings. The Court Chapel has given its name to the narrow court entered from Residenzstraße through a large gateway flanked by lions.

The Antiquarium building created under Duke Albrecht V forms the south side of an octagonal courtyard completed during the reign of Duke Maximilian I. It takes its name from the fountain in the centre, which is crowned by a bronze statue of Duke Otto I, the first duke of Bavaria from the Wittelsbach family.
In the 17th century, the Fountain Courtyard with its characteristic gable architecture was frequently used as a representative setting for court tournaments. Only high-ranking visitors were allowed to drive into it in their carriages. 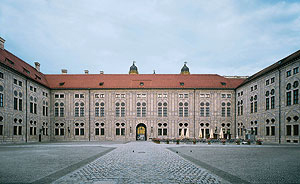 The buildings around the Imperial Courtyard were erected from 1612 to 1618, in the reign of Duke Maximilian I. The north wing opposite the new Court Garden contained entrance and reception rooms and the monumental Imperial Staircase. The suite of rooms in the west wing was reserved for imperial visits. The Imperial Courtyard was only open on major ceremonial occasions.

Duke Maximilian I had parts of the medieval Neuveste demolished, and the remainder linked by corridors to the new Imperial Courtyard wings. This created a courtyard to the east of the Imperial Courtyard originally known as the Kitchen Courtyard.
From 1832 King Ludwig I had the architect Leo von Klenze design two new buildings, one adjacent to the Baroque north wing of the Imperial Courtyard and one overlooking Marstallplatz. While the Festival Hall Building on the north side contained rooms for royal ceremonies, the rooms in the east wing included the court apothecary, where Max von Pettenkofer (1818-1901) was employed (this is now the site of the Cuvilliés Theatre). Since then it has been known as the Apothecary Courtyard.

The small triangular area between the Antiquarium, the Grotto Courtyard building with the Rich Rooms on the first floor and the Green Gallery is known as the "Puderhöfchen" because a small room overlooked it in which wigs were sprinkled with white powder (Puder) in the 18th century. This "Powder Cabinet" was accessible from the rear chambers of the Electoral Apartments on the upper storey of the Antiquarium building. It was destroyed in 1944, and the Puderhöfchen, since given a glass roof, is not open to the public. 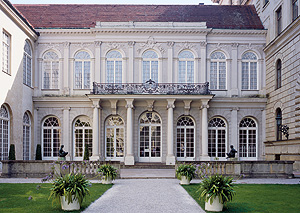 The Royal Palace (Königsbau) was built on Max-Joseph-Platz from 1826 to 1835 to designs by the architect Leo von Klenze as a residence for King Ludwig I.

Its courtyard replaced a garden and is bounded in the east by the Green Gallery of 1731-33, designed by François Cuvilliés the Elder.

Located behind the Green Gallery and the Old Treasury (erected by Prince Regent Luitpold in 1897 and now the museum ticket desk and shop), the Kitchen Courtyard took its name from the cooking facilities that once occupied the ground floor of the Royal Palace. These rooms have housed the Treasury since the reconstruction of the Munich Residence after the Second World War. 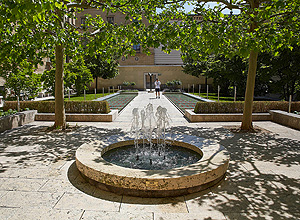 The space between the neoclassical buildings erected after 1832 on the eastern side of the Apothecary Courtyard and the Court Church of All Saints was separated from Marstallplatz by a wall and could be reached only via a narrow opening. Virtually cut off in this way and turned into a garden, it was named the Cabinet Garden. It has been open to the public since remodelling of this area was completed in 2003. 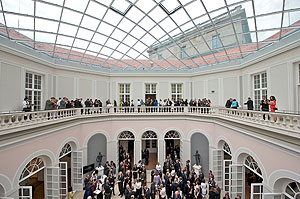 The court theatre of 1751-55 designed by François Cuvilliés the Elder (now called the Cuvilliés Theatre) was destroyed in the Second World War. The carved decoration of the tiers had been removed to safety beforehand, and after the war the auditorium was reconstructed on a site near the south-east corner of the Apothecary Courtyard. An entrance area and cloakrooms were constructed around a new, octagonal courtyard, named the Ornamental Courtyard, in the area between the rebuilt theatre and the Fountain Courtyard.