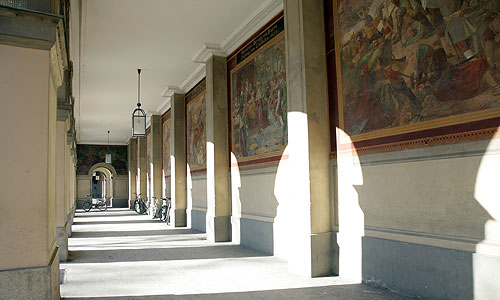 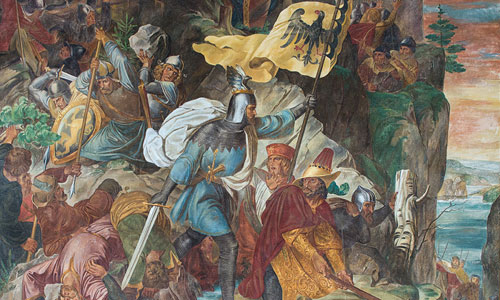 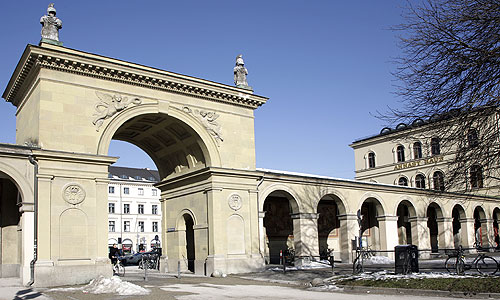 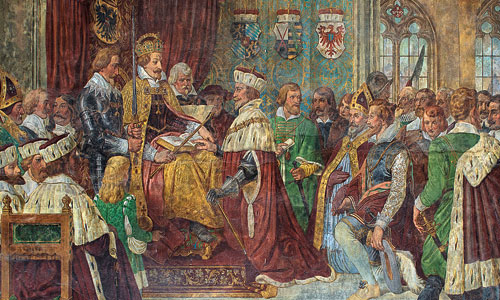 Arcades were built round the new Court Garden as early as 1613/17 under Maximilian I, and decorated with cartoons (painted templates) by Peter Candid for exquisite wall hangings with scenes from the life of Otto I von Wittelsbach (the tapestries are now in the Stone Rooms of the Munich Residence). In 1779/83 Elector Karl Theodor built the publicly accessible 'Court Garden Gallery' above the north wing of the arcades, in which the famous Wittelsbach painting collection was exhibited until the Alte Pinakothek was opened under Ludwig I (1836).

In the 19th century too, the arcades remained as a public showplace for art. Between 1816 and 1848 Leo von Klenze replaced the previous buildings surrounding the Court Garden and created an entrance to the royal garden complex with the triumphal Court Garden Gate (1816/18) and the adjacent bazaar building (1825), which had shops facing the city and the new Ludwigstrasse. Between 1826 and 1829 the west wing of the new arcades adjoining the Residence was painted with historical frescoes by pupils of the painter Peter von Cornelius. It also had wall paintings of Italian landscapes by Carl Rottmann (1830/33, today in the All Saints’ Corridor of the Residence); his series of Greek landscapes (from 1838) that was initially intended for the north arcades was however exhibited in the Neue Pinakothek instead.

The fresco cycle with scenes from Bavarian history, which was already a focus of attention and controversy in its day, is an important early example of history painting, one of the main painting genres of the 19th century. Especially in the bourgeois societies of the new nation states, painted history was used as a means of affirming their traditions and identity. With topics such as the liberation of the German army by Otto von Wittelsbach or the elevation of Maximilian I to the status of an elector, Ludwig I continued the glorification of the Wittelsbach dynasty in art already begun here with the exhibition of the Candid cartoons. The 16 wall paintings depicted a military and a peacetime event for each of the eight centuries of Wittelsbach rule in Bavaria. Additional paintings – allegories of the ruler’s virtues relating to the individual scenes (no longer in existence) and embodiments of the state of Bavaria itself – enhanced the observer’s awareness of the beneficial government of the traditional ruling house. With this publicly accessible ‘picture book’ of Bavarian history in the form of permanent frescoes, the king hoped to promote the loyalty and patriotism of his subjects, in accordance with his conviction that ‘Public works of art have an effect on the people, and an influence on their lives.’

In 1943/44 some of the buildings surrounding the Court Garden were destroyed, and were rebuilt in a simplified form between 1947 and 1957. The fresco cycle illustrating Bavarian history was most recently restored in 2008/16.