Crown of an English queen 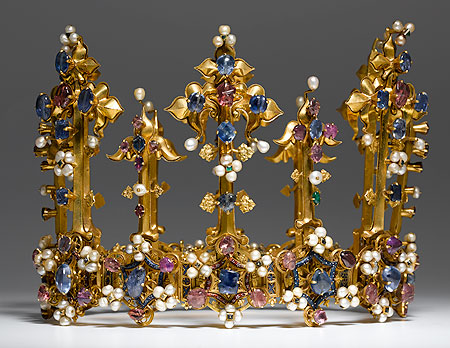 The crown is recorded in England in a list of jewels and plate drawn up in 1399. It probably belonged to King Edward III or Anne of Bohemia, the wife of King Richard II, who was deposed that year by Henry IV. Henry's daughter, Princess Blanche, married the Palatine Elector Ludwig III in 1402 and the crown pa ssed to the Palatine Treasury in Heidelberg as part of her dowry.

In 1782 it was transferred to the Munich Treasury along with other jewels belonging to the Palatine branch of the Wittelsbach family. This is the oldest surviving crown of England.