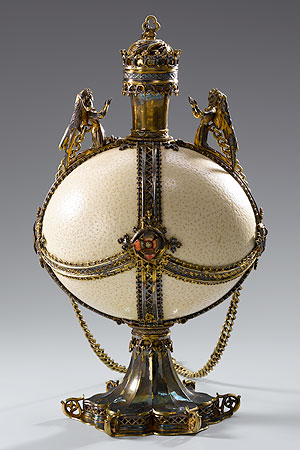 The body of the cup, which comes from the former Benedictine monastery of St Veit at Herrieden near Ansbach in Franconia, consists of an ostrich egg.

Ostrich eggs were highly prized as exotic rarities both in the secular world of Kunstkammer and cabinets of curiosities and in ecclesiastical contexts.

The Gothic mount of the present cup, with its spiral cap, chain and adoring angels, suggests that it was used as a reliquary or as a container for sacred liquids, such as water from the river Jordan or holy ointments.